Father in Heaven, let Your message be what is seen and heard in these words that follow. In Jesus name I ask it, Amen. 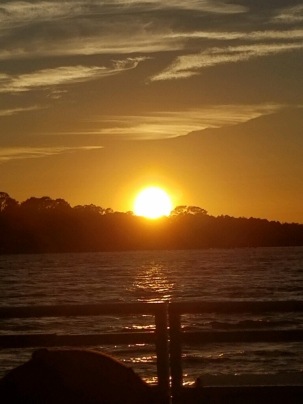 Deep breath in… wooooo! Well where do I begin? Back in February, I told you all about my dear friend who was tragically taken from us in a horrible car accident.

A few days after the emotional shock settled down, I remember standing in the dining room of the condo we were staying in and telling my husband that I felt like some big changes were coming. I didn’t know what they were or when they would happen or even why I felt that way. It could have been the unexpected deaths or the fact that my youngest child is graduating in just a couple months or something else entirely. All I knew is that things just felt different.

We came home from our vacation (reluctantly I might add) and unloaded the car. The house was the same, our dog and cat were the same, even the weather was the same as when we left— cold and snowy in case you were wondering. Every year we go on vacation, it gets more difficult to face coming back to the unforgiving icy breath of winter blustering that it’s not finished with us yet. It made it especially hard this year with so much sadness preceding our homecoming.

For many years my husband and I have dreamed of warmer climates, sandy ocean beaches, and a job that wouldn’t be so physically taxing on my husband’s body. Since I rely on him so much because of not being able to drive myself, he worries that he will not be able to do it as often or as long due to his demanding job responsibilities. He is a highly skilled craftsman and his talents are in high demand in certain areas. Although he has built up his reputation where we live, work in his field is becoming scarcer.

While the kids were still young, we only dreamed of heading south. We wanted them to grow up with family around them. My son is going to be twenty-years-old in seven months, and as I mentioned earlier, my daughter is graduating soon. Their career choices will certainly take them out of the area they live in now. But aren’t we supposed to raise our kids, teach them to fly, then watch them take flight?

Well after coming home from this vacation, my husband was feeling very impressed upon to just throw his résumé out there on a job search site in the state of Florida. Now before I lay the next brick down in this road of our journey, let me say that we were not expecting any outcomes one way or the other from such a random act of searching. We basically said to God, “if You want this to go anywhere Lord, You have to open the doors and lead the way.”

This was much like throwing a handful of darts at a dart board and seeing which one or ones would stick, if any. We expected nothing, but hoped for everything. We just let God take control and waited.

My husband put out exactly ten resumes on a Tuesday afternoon. By Wednesday late

morning, he had seven interviews lined up. He quickly scanned flights for the following Sunday, scouted out inexpensive hotels, and by Monday morning, was in Florida preparing for his week of interviews. Jeremy (my hubby) had appointments throughout Florida that would span a seven-hour travel time. Mind you he didn’t have them in one day. But they took him from town to town. By the end of the week, Jeremy was back on a flight home; carry-on bag in one hand and phone containing the Emails with four job offers in the other. Our dream and what could be our reality were now staring at each other face to face.

Over the next few days our family of four came together and prayed, my husband and I prayed, our kids prayed, we prayed individually… well… we just prayed like crazy! We narrowed the field down to one job that Jeremy had been leaning toward from the beginning of this process. He called the gentleman who did the interview and told him that he was very interested in working for this company. The interviewer told Jeremy that was great to know.

For whatever reason, we had been under the impression that this man was simply waiting to hear back from Jeremy as to when he could start. We had spent the week crunching numbers, looking at rental homes, and planning how to tell our families we would be moving out of state. Then we were a bit blind-sided to hear that they had interviewed two other guys for this position and would be letting Jeremy know by the next week. Six… whole… days had to painfully go by before we would hear their decision. Our reality that had been face to face with our dream seemed to fold its proverbial arms in a huff and was now tapping its toe rhythmically along with the ticking of the clock. How in the world were we supposed to wait anywhere from three to six days to find out if our fifteen year long dream would come true?

Well to avoid this post being a short book, I’ll leave you with waiting to hear the conclusion until next week! After all, Ephesians 4:2 says “Be completely humble and gentle, be patient, baring with one another in love.”

So be patient with me and bear with me in love. I will share the rest with you all next week. I’m so glad to have you at my table! Come back and see me next week, okay? I’ll have a recipe at the end of this testimony. But in the meantime, feast on God’s word. It’s so much more nourishing and filling than anything I could cook up for you! See you all soon!

This is Me Hi, I’m Cyndi! I am a wife to a wonderful God-fearing man for almost twenty years. I am a mom to an ambitious comedic eighteen-year-old son and a spirited fun-loving sixteen-year-old daughter. I love to cook, create anything I can think of to make, talk and visit with friends and even strangers, and of course I love to write. Along with the writing, I love to read what other people write as well. I would love to live in the south somewhere but for now I live more in the suburbs of a town in Michigan. Oh yeah… and I’m almost blind. This means that I have to do things a little differently. It takes a little more time and a little more patience to get things done, but they get done. I was told of my eye disease when I was nine years old. At forty-four, they still cannot diagnose what I have for certain. However, I won’t sit still while they try and figure it out. Each day brings different challenges and some of the same as well. Navigating new territory is the most difficult thing for me to do, but I refuse to be held back and take the chance on missing out on an exciting new adventure. My bucket list holds adventures like parasailing, visiting Ireland, having at least one book published, and I’m sure there are more that I haven’t listed yet. Painting word pictures is my therapy and sanctuary. I use life as my brushes and paint. Lite me a candle, put on the spa music and a-writing I will go. Come on this journey with me, I hope you can find some new colors you like. View all posts by aroundthetable365

2 thoughts on “It’s been a wild ride so far”